Wu Xia is an interesting historical fantasy that treads both old and familiar ground, as well as injecting some fresh ideas into the genre with great stylistic flare. Set in the southwestern province of Yunnan in 1917 China, the film takes place away from the royal courts of the ancient and imperial era, instead concentrating on the local village of Liu’s relation to the strange laws of regional warlords and Triad factions. The majority of the action is set around the small village, with its fantastic surrounding rural landscapes and rivers. Jinxi (Donnie Yen) is the film’s heroic martial champion caught up in the violent codes of this Chinese wilderness. What sets the character apart from many preceding films of the genre is his initial appearance as a benign paper worker and family man, who luckily defies the odds when he manages to stop the robbery of his shop and kill two of the lands’ most wanted bandits trained in martial arts. What follows is the shady uncovering of Jinxi’s darker and more violent history. This is an idea explored in several other films, such as David Cronenberg’s “A History of Violence”, yet the narrative tendency bears new weight and direction here, with specific orientation around a very particular set of ideas on identity, violence and the law. 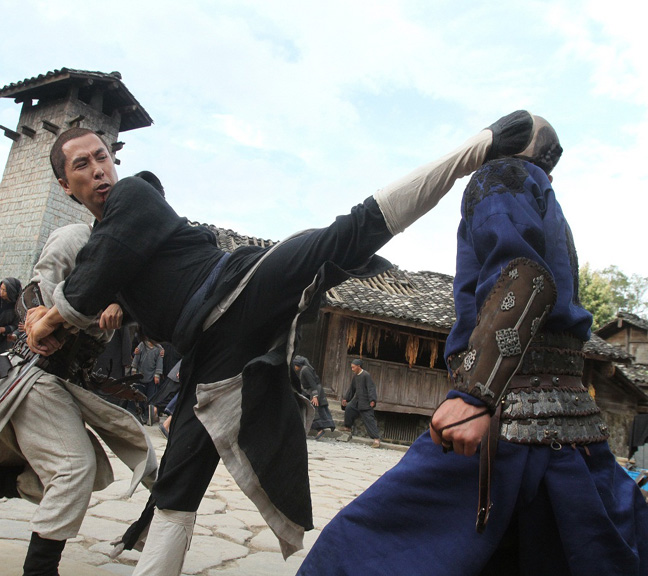 Jinxi is a man caught up in a perpetual cycle of violence and who struggles to free himself from his own historical condition. His stoic and reflective personality is offset by the introduction of the eccentric detective Baijiu (Takeshi Kaneshiro), who is also conditioned and bears the weight of his own past. Baijiu is obsessed with controlling his own thought processes, and with a cold objectivity constantly attempts to reel in his empathy for Jinxi, whose true origin he is attempting to uncover through physiological manipulation. With these techniques, he both re-engineers his own social conditions, of which he believes are responsible for his own mistakes in life, and suppresses the literal poison of past encounters. Jinxi is also attempting to escape his own childhood conditioning, and so the two characters, haunted by their past, find common ground. It is interesting that the film depicts human identity with such materiality (open to a strange mystical science and physiological exploitation). Traditional western metaphysics and concepts of causality are challenged here, with Jinxi repeatedly stating the world’s relativity, where criminals and even murderous bandits (the outsiders and exiles) have their own complex historical trajectory, that often lies at the edge (or beyond) the good and evil of legal and customary social structures. The social and historic fatalism in Wu Xia is fascinatingly, and at times overwhelming.

The law generally plays an important role in the genre, with the world being an antagonistic combination of the excesses of formal law and authority and the spaces of violence and lawlessness that lie between the rivers and lakes. It is within this landscape that the wandering hero (Xia) operates, often with his or her own particular moral code (often in opposition to the State or Empire’s). The genre often plays with this duality between rigidly structured law and hegemony, and the transgression of this through violence. Themes around deceit, deception and corruption are also explored (themes that all lie beyond the remit of a traditionally truthful and authentic law). It is with these foundational ideas that Wu Xia performs its modern twist – set during one of the select historical periods where China was not dominated by a single conclusive State, the moral relativity shown in the film acts as a window upon which the functions of current hegemonic legal and social structures might be viewed and criticised. Set against the background of imperial collapse and new social and political movements, Wu Xia subtly highlights the vacuum that exists beyond the surface of power and authority. It is the social and symbolic laws that often define a particular historical era, yet here they are exposed as uncertain and inessential, whilst a rampant materiality is left free to roam the forest and hills.

This materiality is enhanced visually, both in the mad detective Baijiu’s deductive observations which take on a neo-noir flavour, and in the fight scenes where physical blows cause the camera to zoom in and permeate flesh to reveal pulsating blood vessels and the severing of nerves. The style is reminiscent of Guy Richie’s recent adaptation of “Sherlock Holmes”, yet here it is more at home next to the impressive physicality, and paired alongside equal narrative forms based around acupuncture, forensic work and martial arts. These all help to situate the fantastical world and edge the story forward. Although not as action packed as other films within the genre, the fight scenes are visceral and well choreographed (by Donnie Yen). Wu Xia is a potent combination of weird-noir thriller and traditional Chinese swordplay, with a particularly strong nod to the classic “The One-Armed Swordsman”. The film’s overused premise and the inclusion of several tired plot devices can be forgiven, as it does little to quell the excitement and rigor of its eccentric spirit. 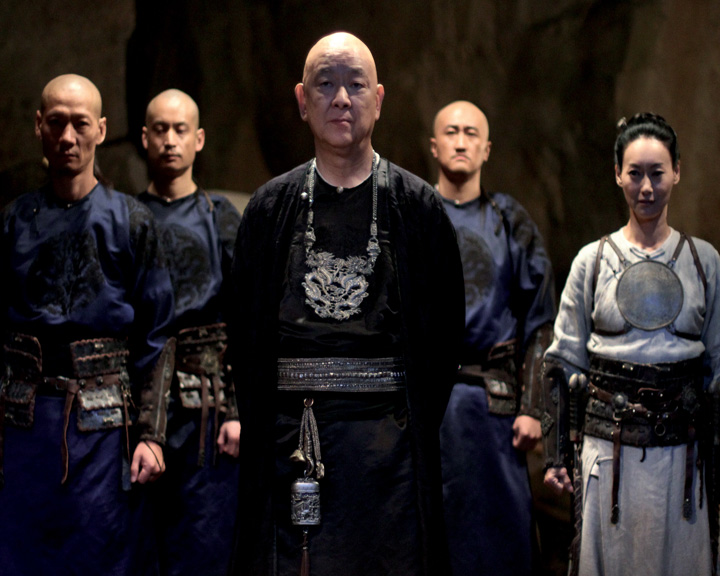