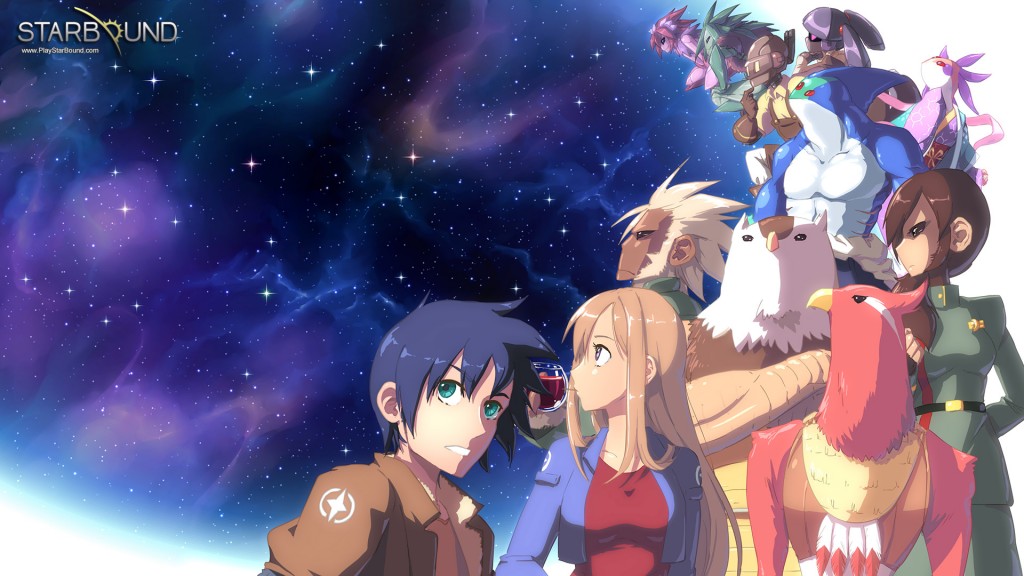 Starbound’s garishly colourful 2D pixelart and intriguing blend of creation, survival and exploration automatically draws comparisons to 2011’s Terraria – but does this particular incarnation further develop the formula? Developed by indie studio Chucklefish, Starbound is a procedurally generated sandbox where you beam down onto planets, dig deep underground, mine ore and uncover lost treasures from ancient ruins across the galaxy.

The planets vary in their terrain and biomes, and from the colour of their flora to the oddities of their wandering creatures. They also increase in difficulty, meaning mining and crafting better items and equipment is essential to progression.Players will quickly grow beyond the confines of their original planet and be compelled to gather enough carbon-rich materials to power their spaceship and venture forth to more dangerous environs. It’s a neat system of progression driven by the randomness of the worlds and the player’s desire to explore the unknown, leveling and gearing up as they go. The virtual universe of Starbound is almost boundless, with each planet you visit generating a random set of numbers (a seed) of which players can then share with one another outside of the game, slowly mapping worlds of interest and giving persistence to an otherwise random system. 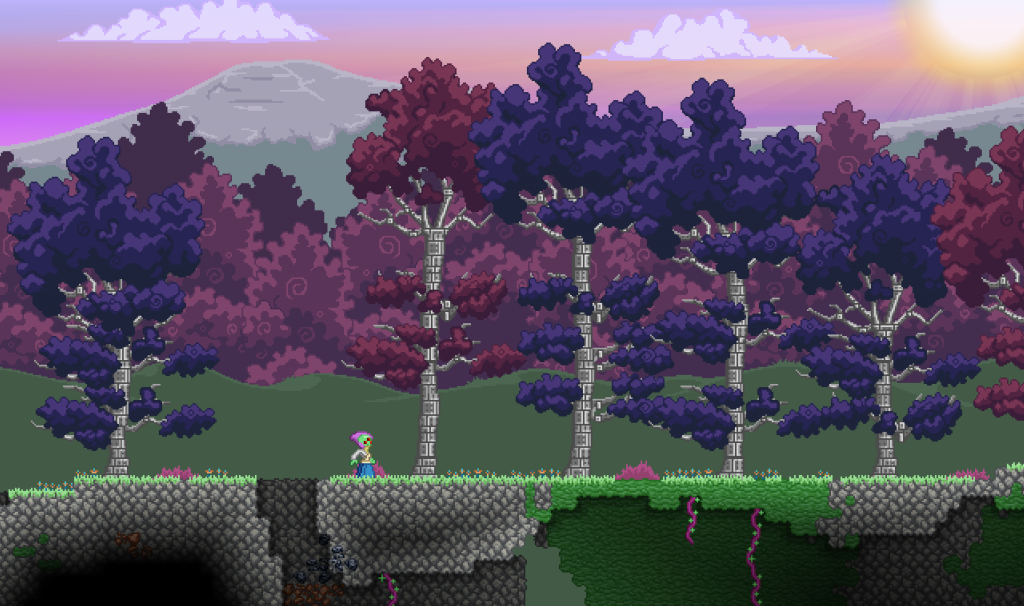 What’s most exciting about these games is the spelunking, the often collective discovery of cavernous networks and tunnels with only a handful of torches, platforms and ropes. Navigating treacherous pits and pushing on into the darkness despite having only a handful of dimly glowing flares and a single bandage is one of the game’s most powerful experiences. The randomness of the planets means the cave systems are different every time, and there is always the chance of coming across a mysterious underground base or dungeon where the rewards are often sweeter. The sand and water physics are an improvement over Terraria’s, and always act as interesting and playful obstacles during underground exploration. Enemy creatures seem to be severely limited at this early stage, rushing at the player without the pretence of intelligence, yet like some of the game’s environmental dangers and booby traps, they ultimately work to add a layer of tension to the exploration and play on the fear of being sent back to the surface and losing progress. These dangers tie in with the genre’s survival elements, which Starbound expands upon by adding a hunger bar and a planetary temperature that ties into the weather system and day and night cycle. The effects are limited, but are definitely an interesting improvement even at this early point.

Random treasure chests and clumps of rare minerals for crafting are the means of toughing it out in more dangerous planets and delving deeper. With precious ore mined, players can construct a number of different items in order to improve their chances of survival. With a sturdier set of armour and a more robust and damaging arsenal, there is the hope of digging to the molten or icy core of the most hostile planets. Loot found whilst exploring adds a great dynamic, bombs, dynamite and drills make digging quicker and more efficient, and some rare items grant abilities – ancient tech might allow you to dash or jump higher, meaning you can now traverse treacherous terrain more easily. 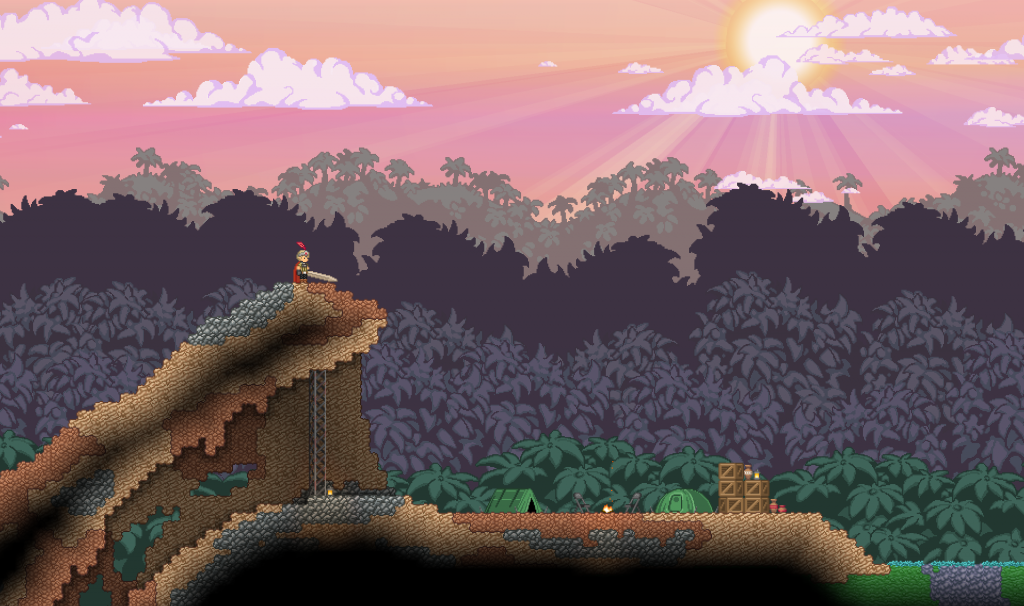 The central conceit of Starbound is, no matter how you look at it, “Terraria in space”, yet unfortunately it’s just as terrestrial of a game as its predecessor. Space here recedes to being just a backdrop. Your ship is just another room to dress up prettily with the game’s myriad of plush furniture, as well as acting as the interface for the ‘generate new world’ button (internalising a process which before lay in Terraria’s main menu). Whilst the promise of a more developed engineering system (similar to Minecraft’s redstone) may introduce some much needed creativity and ingenuity to the current block-building formula, at heart it’s a game about digging down from the surface, of cave exploration – and unfortunately never space exploration. Space is perhaps more of a three dimensional experience, and so in that respect Starbound is inherently disadvantaged, yet I still think there’s reason to criticise the lack of scope on offer.  Whilst the game is currently in an early form, and there’s a lot more content promised, any expansive experience of space exploration, of being bound for the stars, seems a distant and remote dream. Even the sci-fi tropes that appear; the matter manipulator, the energy weapons and pulse jumps, are a thin disguise for a game whose scope and depth always remains primitive and terrestrially confined.

As a game of spelunking and mucking about underground, Starbound is worth experiencing (particularly  with friends). It falls short in part due to it being, as of the moment, unfinished, relatively thin of content and with several potential systems yet to be implemented or expanded upon. However, there is also the possibility that the procedural generation at the core of Starbound is now set in stone, and that elements that might add to the senses and experiences of underground exploration and adventure might be neglected in favour of more furnishings and simply higher levels of ore and armour, all without any qualitative impact. Whilst I fear that the promise and potential of the space setting will never quite be reached, Starbound’s critical shortfall is that it is simply another form of Terraria.