Democracy 3 is a truthful representation of contemporary governmental politics – a slick but depthless experience that unfortunately rings hollow. You can play the role of one of six powerful, western governments, gradually altering policies via sets of sliders, in order to please various factions of voters – a popularity contest if you will. Those looking for a grand political simulation or sandbox will be disappointed, Democracy 3’s scope is far smaller, yet no less restrained. The user interface paints a web of complexity, which can then give way to visible flows of determinations, lined connections so that you can see and calculate an output for every input. It’s visually elegant, but also coldly mechanical – a narrow game of cause and effect that means there’s never the space for the unusual or unexpected. This transparency means the game is genuinely accessible and easily to learn, but it also shows how stripped down and nakedly simple things really are. Many of the game’s systems are designed to be rigidly one-way. There’s also always a shortage of possibilities and decisions, and often only a single solution for each political problem. 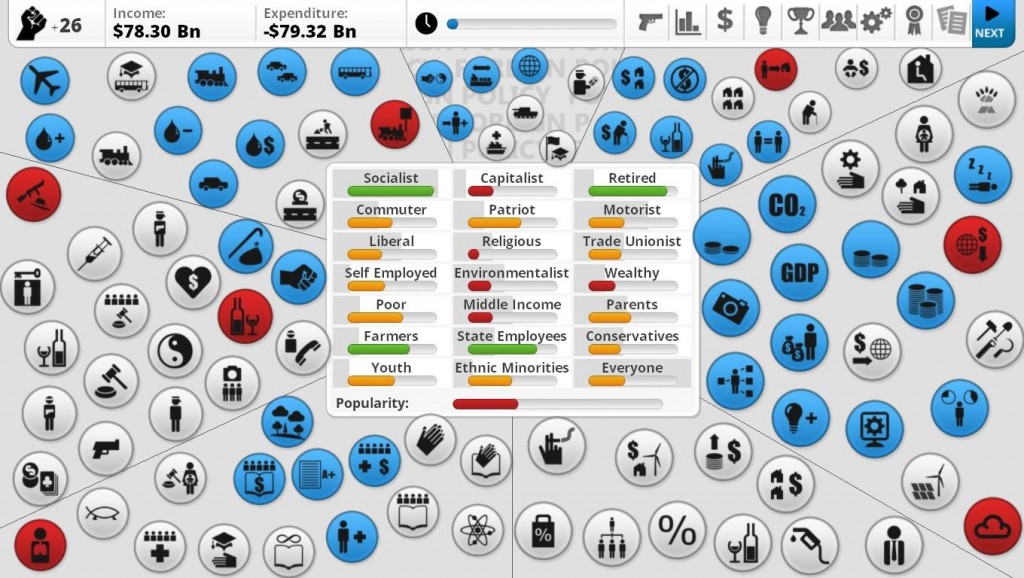 Much like in the real world, the political goals that the game sets are ultimately short-term, acting to funnel your policy decisions towards an amorphous middle ground, so as not to upset the electorate and be ousted from power. The economy is similarly all about balance (income versus expenditure), as the game continually reminds you to lower your debt and deal with the deficit (as if we’ve not heard this enough). A good economy is a trim one, with relatively low taxes. Playing otherwise will draw the fire of the economy-police/credit agencies. Whilst pleasing everyone appears impossible, it still feels as though it’s encouraged, as policies which are too severe or extreme prove divisive, and displease swatches of potential voters and throws the player disruptive crises that can’t be solved without u-turns or backtracking. Tax the wealthy and the country will be faced with a Randian-like “brain drain” and exodus of all those great and innovative, and causing your GDP to plummet. The influence of these determinations seem obviously drawn from the headlines and news stories of the mainstream media. Combine this with a knack for the petty and the trivial; junk food and plastic bag taxes, prisoner tagging, and tinkering with alcohol age limits – it’s every bad tabloid story rolled into one game. The game throws up a number of scenarios for the player to deal with, ranging from the “controversies” of fracking to internet surveillance. Although Democracy 3 is often topical, the line of the status quo is unfortunately never too far behind. 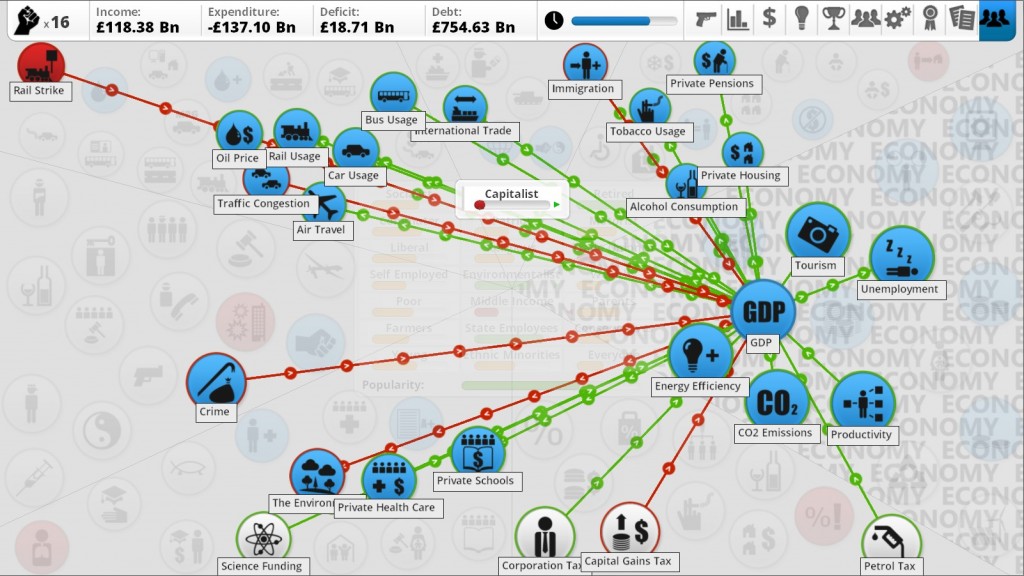 Orthodoxy reigns, and in this sense, Democracy is an exemplary imitation of the constant back and forth of party politics in our peculiar, democratic age – dull, shallow and obsessed with public relations and voter polls. Everything gravitates towards the current consensus, yet Democracy is at its best when its pre-coded aims are entirely abandoned, and players try and stretch their government to one extreme or the other in order to coax some kind of substantial or unscripted effect from the system. The substance never comes. The ability for alternatives is limited. Although the game doesn’t completely break down, it frays at the edges. You can build successful fascist-surveillance states, or populist welfare-based social democracies, but they never feel very well realised, and the game always seems as though it’s trying to bring you back to its own prescription of cosy liberalism. You can still do well at the edges, its strangely unchallenging at times (well, until a group of capitalist terrorists plot to assassinate you). All sorts of flashing-red crisis scenarios will present themselves, yet you can still attain election victories with up to 90% of the votes. It’s as though the game was made to be purposely forgiving, so as to encourage experimentation, creativity and alternatives in a game which otherwise stifles these, and is clearly primarily programmed for slight policy tweaks and restrained moderation. The game may shower you with positive feedback, tell you you’re doing well – achievement unlocked – but it’s unlikely to fool you for long. It only takes an hour or two to realise how shallow an experience it is, and then the gig is permanently up. There aren’t enough things you can play or tinker with to justify repeated play-throughs. As a simulation, it’s less of a game or toy to play about with, and more of an uninspired attempt at an educational tool. Educational in the loosest possible sense of course – it’s a sloppy undergraduate thesis that plays to the establishment, talks down at you, and is both unexciting and infuriatingly singular in its approach. Like the television show The Thick of It, Democracy 3 bares all the false glitz and absurdity of our contemporary political system, yet it does so completely unconsciously, and unlike that thing on the telly, lacks both the satirical bite as well as just the plain old fun.